Voice over Internet Protocol (VoIP), is a technology that allows you to make voice calls using a broadband Internet connection instead of a regular (or analog) phone line.

What is VoIP or SIP Phone? 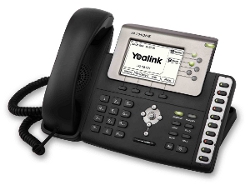 A VoIP phone also called an IP phone uses voice over IP technologies allowing telephone calls to be made over an IP network such as the Internet instead of the ordinary PSTN system.

VoIP phone can use different control protocols such as SIP or other proprietary protocols.

SIP Phone is a VoIP phone based on a Session Initiation Protocol that provides a SIP-based VoIP network. (see What is SIP? for more details)


IMX is compatible with ANY SIP 2 compliant phone (softphones and hardware devices)!